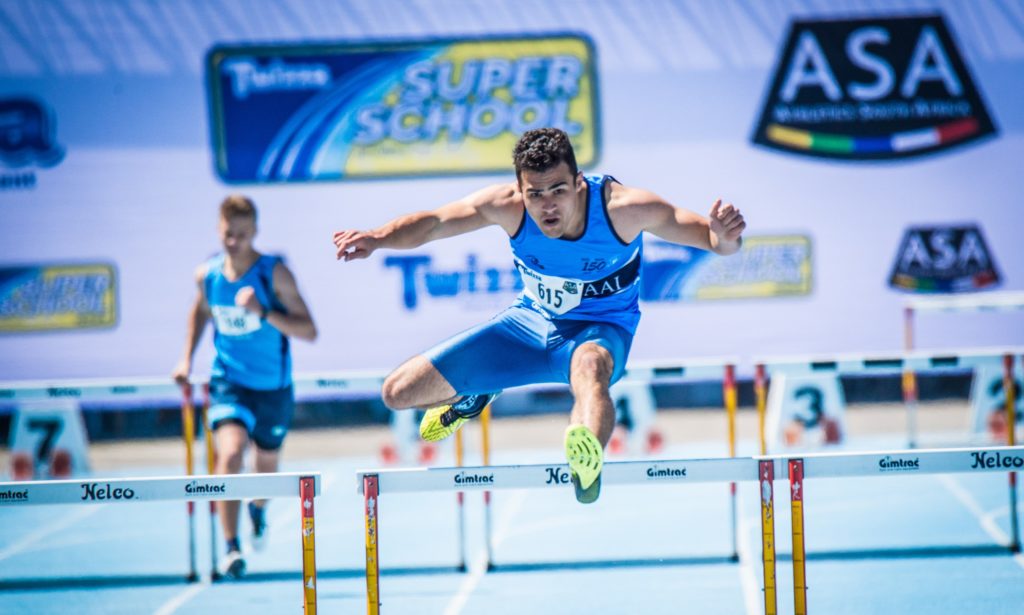 Seen here:  Luciano Custodio in action during the Boys U19 400m Hurdles.

The Green Point Athletics Stadium was buzzing with excitement today (Saturday 05 October 2019) with schools from the Eastern and Western Cape pulling out all the stops while competing for the coveted title of SA’s best athletics school at the Twizza Super School Series Regional Qualifier 2.

“The Twizza Super School Series delivered fine competition in Track and Field today,” says Athletics South Africa President, Aleck Skhosana.  “We are laying a foundation for future stars in youth, junior and ultimately the seniors.  The great spirit of athletics between winners and those who didn’t win the titles of the day was truly inspirational. Schools competed against each other, made friends and produced outstanding talent. We are now looking forward to seeing what the Grand Finale holds in store in February 2020.”

“It feels great to be the best boys school at the Twizza Super School Series Regional Qualifier 2,” says Luciano Custodio from Paarl Boys High School.  “We knew that everyone would come out hard because of how big the competition was, but we stayed focused and just kept on training.  It would be amazing to represent our school at the finals.”

Custodio secured the 1st spot on the podium in the Boys U19 400m Hurdles with his impressive time of 55.33.  “I kept it relaxed in the beginning and just tried to go as hard as I could.  At the end of the day I am very happy with what I got.  The Twizza Super School Series is great.  It’s a great idea for young people to have competition and just run.  Our athletes have been working hard.  I knew we’d do well.”

According to Rayno Snyman, Master In Charge of Athletics Paarl Boys’ High School, it’s a privilege to be the best boys school.  “We really looked forward to the Meet.  We had a few mishaps in the week with a few athletes getting injured, but we still managed to push through.  I’d like to congratulate all the athletes that gave their all to get there.”

According to Elke Van Der Westhuizen from La Rochelle it feels good to be the first Girls school.  “We definitely worked hard for this event.  We supported each other and trained together.  The Twizza Super School Series is a great Meet for schools in South Africa.  There is a lot of strong competition in Pretoria and we’d like to be exposed to it.”  Van der Westhuizen placed 2nd in both the Girls U16 100m and 200m events.

The Mixed Competition was won by Parel Vallei, with Bellville finishing 2nd and HTS Drosdy 3rd.

“I am really proud of our school,” says Zenade October from Parel Vallei High School.  “It’s a really big achievement.  We motivated each other by pumping each other up and cheering for each other.  This achievement will definitely motivate us to have an even better season.”

October claimed gold in the Girls U16 800m with her time of 2:19.79.  “I’m quite proud of myself.  I didn’t run my best time, but it is ok.  I didn’t think of anyone around me, just focused on myself.  I really enjoyed the Twizza Super School Series.”  October also secured the 2nd spot on the podium in the Girls U16 400m.

“The schools from the Eastern and Western Cape really impressed us today,” says Lance Coertzen, Twizza Group Marketing Manager.  “Action packed from start to finish, the Twizza Super School Series Regional Qualifier #2 delivered both on achievements and special moments.  Witnessing the camaraderie between athletes and schools truly was heartwarming.  We commend each and every athlete for their efforts and hope that you will be rewarded with a spot at the Twizza Super School Series Grand Finale that will take place at the Bestmed TuksAthletics Stadium on Saturday 01 February 2020.  We invite consumers, athletes and supporters to #TasteTheMoment with Twizza as we crown SA’s best athletics school.”

The Regional Qualifier 1 (that took place on 19 September at Bestmed TuksAthletics Stadium) and Regional Qualifier 2 results will be tallied, with the overall Top 40 Boys Teams and Top 40 Girls Teams advancing to the Twizza Super School Series Grand Finale.

EXCITING NEWS: Adding to the excitement, the Twizza Super School Series Grand Finale will boast an energetic cultural element with live performances from performing arts groups that stem from the top qualifying schools.  In addition to performing for a large audience, the groups and schools can look forward to taking home exciting prizes compliments of Twizza.  The mechanics of the selection process will be released at a later stage.