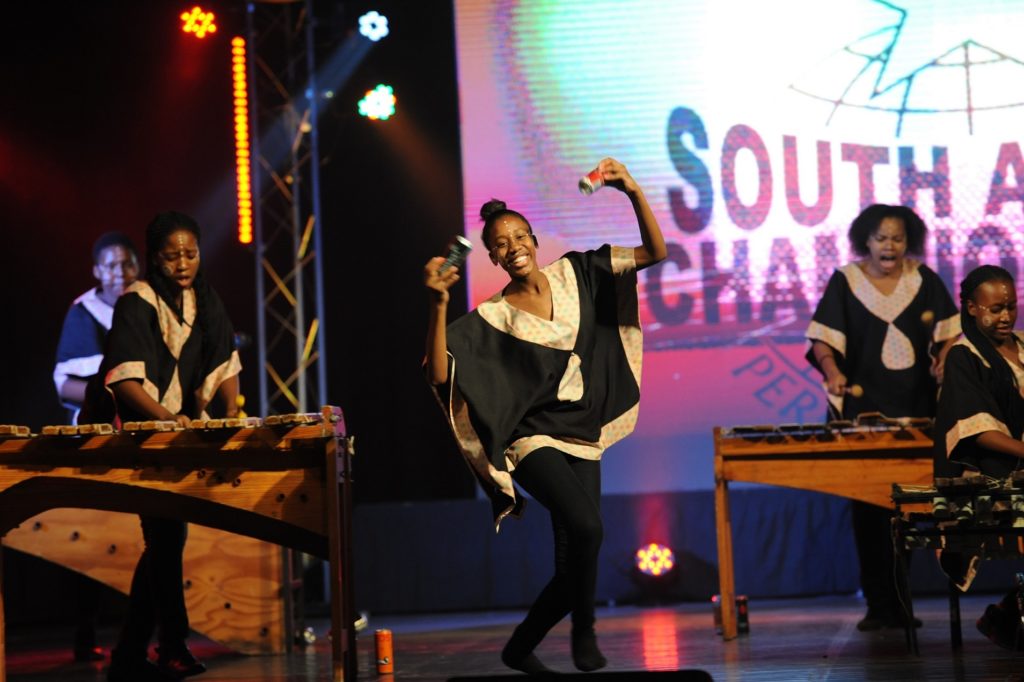 Seen here:  The Prestige College Marimbas in action during the South African Championships of Performing Arts.

In addition to an exciting battle between athletics giants from the North versus those in the South, the Twizza Super School Series Grand Finale will also boast spectacular live performances by five award-winning school’s performing arts groups.

The Menlo Choir is a lively and energetic choir with 120 choir members between the ages of 13 and 18. The choir members all take part in various activities, but enjoy making music and singing together.

“We have participated in four World Choir Games all over the world and will be travelling to Belgium later in the year to take part in this year’s World Choir Games,” says Jeanmari van Papendorp, Menlo Choir Conductor and High School Menlopark Head of Department for  Music.  “The choir, as with all the other activities, is encouraged to take part in the most challenging of competitions.  Its list of excellent achievements is quite astounding and include gold medals at the World Choir Games. They also achieved top honours at the national ATKV choir competition in 2019 and were awarded best mixed choir at the Pretoria Eisteddfod.  It is an honour to be able to sing the national anthem at the Twizza School Series Grand Finale. We are sure that the audience and the athletes will enjoy the choir’s energy. The choir loves to sing just as the athletes love to take part in athletics. It actually is an amazing combination!  Please join our choir and bless this beautiful country with the words, Nkosi Sikeleli Afrika.”

The Prestige College Marimbas have entertained the country for over 20 years.

“The band has 11 members that are 16 and/or 17 years old,” says Zelia Maree, Prestige College Head of Department for Arts and Culture.  “Our most impressive achievements include winning in two sections at the South African Championships for Creative Arts in 2019. Being the South African winners for Contemporary Music, we hope to get the finance needed to go to Hollywood to participate in the World Championships this year.  We are also the National Eisteddfod winner for contemporary music and came first in the most entertaining group category.  We also walked off with the title for best band at the Pretoria Eisteddfod. Awards follow this group, wherever they go.”

“It is an honour to be chosen to be a part of one of the biggest sporting events in South Africa,” continues Maree.  “The Twizza Super School Series has united children from so many schools and backgrounds.  This is a great achievement.  The audience can expect to be wowed by our high level of performance and energy.  Our music is proudly South African.”

Started in 1943, the Jeppe Pipe Band is the oldest school pipe band in the country.

“We have 35 members that range from 10 to 18 years of age,” says Ross Olive, MIC Jeppe Pipe Band.  “Impressive achievements include being the second ever pipe band in the world to play at the world-renowned Basel Tattoo, an annual military tattoo show performed by international military bands, display teams, popular musicians, and tattoo formations in Basel, Switzerland.  It is an honor to be selected to perform at the Twizza Super School Series Grand Finale.  The band loves to get involved in local events.  Spectators will have the chance to witness some traditional Scottish Pipe Band music performed by a team of extremely dedicated young boys and girls.”

“We are excited to include a cultural element as part of the line-up at the Grand Finale,” says Lance Coertzen, Twizza Group Marketing Manager.  “South Africa boasts immense talent at school level not only in education and sport, but also in the field of arts and culture.  We are proud to compliment the track and field highlights with live performances by these award-winning bands and choir.  The performances are guaranteed to add to the special moments that will be experienced on the day. #TasteTheMoment with Twizza.”