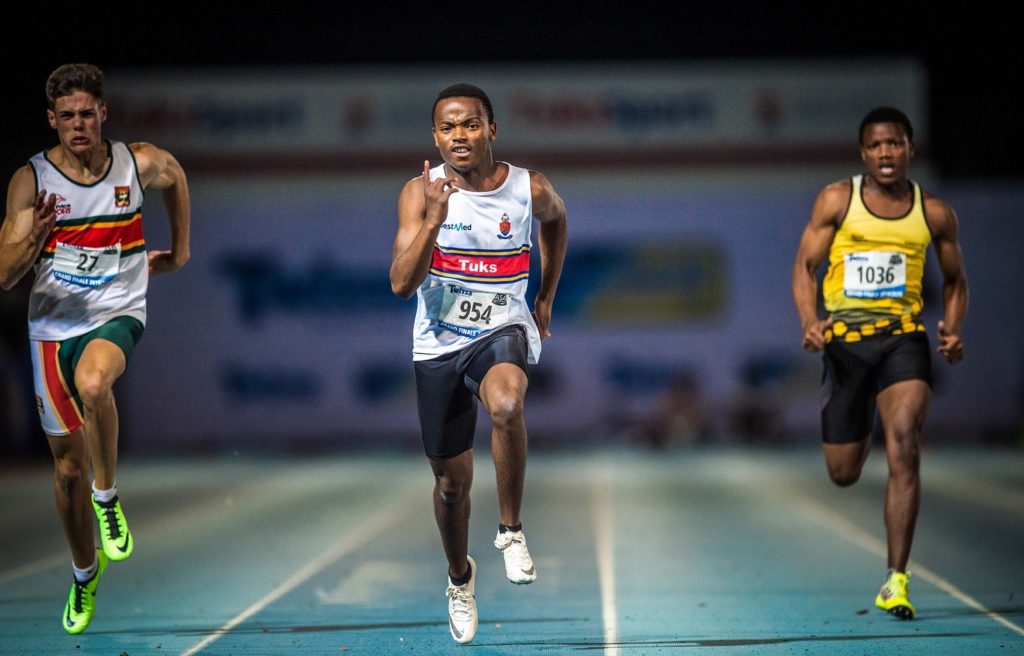 Seen here:  Thabang Hlohlolo from TuksSport High School claimed gold in the Boys U19 100m in 10.51.

“We are excited that we started the season with a bang,” said ASA President, Aleck Skhosana, “Even more thrilling is that we are affording future stars a chance to experience top level competition while they are still at school. With the SABC now on board as the official host broadcaster, the future is brighter.”

“The success of these series encourages us to now look at populating it to other areas beyond the Gauteng and Cape Town legs to give it more access to other students as well across the country. From here we will start exploring how to grow this competition to other countries who may want to send their athletes here. Not only are we referring to countries in Africa but also from all the other six continents.”

“This was our first live broadcast with the SABC since signing the new agreement this past Wednesday. The seriousness of the agreement has seen SABC’s COO Ian Plaatjes coming to Tuks to ensure that everything was in order. Of interest as well, was to see a lot of senior coaches – including Paul Gorries the national relays coach and elite athletes. We look forward to the new instalment of the series.”

According to Eckhart Potgieter from Afrikaanse Hoër Seunskool, it feels wonderful to be the best boy’s school in the country.  “It feels unreal.  The Twizza Super School Series is a good opportunity to show just who the best school is.  And we did it.  I am glad that we could be part of it.  As a team we motivated each other just by attending practice every day.  We are committed.  We just did our best and supported each other at all of the races.”  Potgieter came 2nd in the 200m and 4th in the Boys U19 100m.

“Winning the trophy today is so unbelievable,” says Janie Blignaut from Menlo Park (Girls Team).  “Twizza has given this opportunity to us.  It was a great event and we really looked forward to it.  We didn’t know how it would go between us and Affies (referring to Afrikaanse Hoër Meisieskool).  We were so close and they can definitely be proud of their performance here today.  Menlo has the ‘gees’, it’s just our thing.”  Blignaut finished 5th in the Girls U19 200m and 4th in the Long Jump.

According to Markus Kotzee, from Menlo Park High School, winning in the mixed team category is breathtaking.  “I cannot describe how good if feels.  The Twizza Series is an unbelievable event.  We get a lot of exposure.  It’s great to compete against the best schools in the country.  Motivating each other is just a Menlo thing.  It’s what we do.”  Kotzee came 2nd in the Boys U19 Shotput and 3rd in the Discus.

“The Twizza Super School Series Grand Finale exceeded our expectations,” says Lance Coertzen, Twizza Group Marketing Manager.  “We commend each and every school (and athlete) for what they have achieved today.  Your dedication and enthusiasm truly inspired us.  Congratulations to Afrikaanse Hoër Seunskool and Menlo Park High School, you’ve earned the title of SA’s Best Athletics School and along with that, bragging rights for a year.  The Twizza Super School Series has provided us with an excellent platform to support a sport that we believe in, while creating an opportunity for scholars and parents to connect with our brand and experience the taste of our unique products.  It is a privilege to be a part of this spectacular experience.  We will treasure the special moments that were made.  We look forward to the new season and trust that more schools will sign up to #TasteTheMoment with Twizza.”