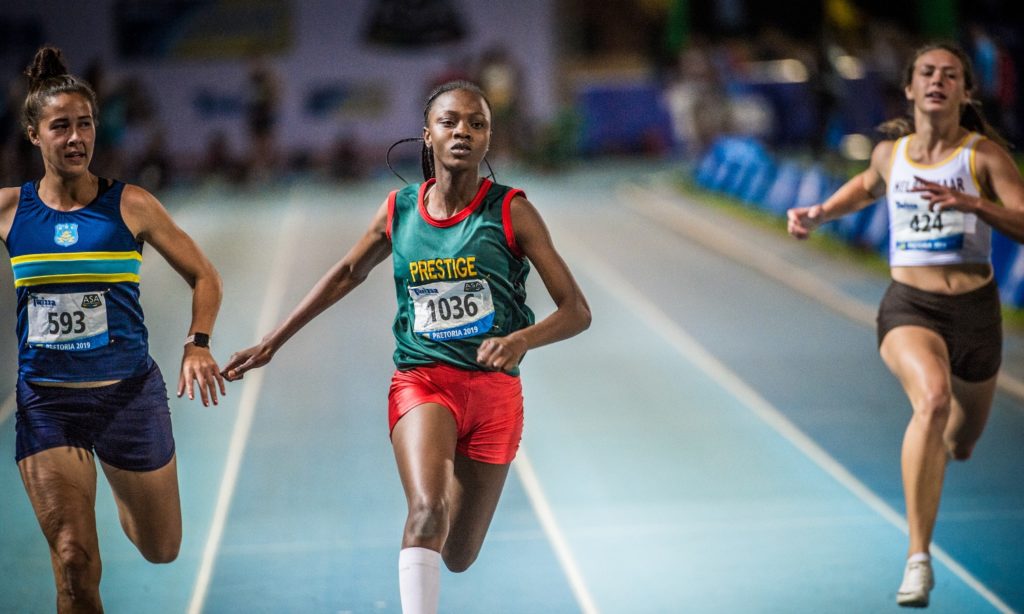 Seen here (from left to right) during one of the Girls U19 100m heats:  Kayla van der Bergh, Banele Shabangu and Megan Starbuck.

The search for SA’s best athletics school started on Thursday 19 September 2019 at the Bestmed TuksAthletics Stadium where 44 schools (1320 athletes) faced off at the much anticipated Twizza Super School Series Regional Qualifier 1.

Menlopark Girls came out tops in their category, with Affies Girls coming in second and Prestige College Girls placing third. The mixed team category was owned by Menlopark, followed by Prestige College and Helpmekaar College.

Athletics South Africa President, Aleck Skhosana expressed joy. “This was a great start to the series which has seen some good competition for the young athletes. It is this type of competition that lays the foundation for future stars in youth, junior and ultimately the seniors. We witnessed the spirit of competition in which athletes expressed appreciation to winners and the defeated.”

“Our results today are unbelievable,” says Lelanie van Wyk, Coach at Menlopark.  “We are in the beginning phases of our preparation.  We really didn’t expect to do so well.  We are really excited.  The Twizza Super School Series is a wonderful event that allows us to compete against the best schools.”

According to Reynard Strauss from Menlopark it’s great for his school to finish first today (in the mixed team category).  “The Twizza Super School Series was a great event.  The vibe was really nice.  The stress levels were high, but that made it great.  I took part in the U19 110m hurdles where I finished first.  I also did the 100m.  It went ok, but I was just hoping for a PB.”

“The Twizza Super School Series is a really good competition,” says Banele Shabangu from Prestige College.  “We must definitely compete again as it will help us to become stronger.  It feels great to finish second in the mixed team category.  We’ve been waiting for this.  We deserve it.”   Shabangu secured points for her school with a first place in the U19 200m, and a third place in the U19 100m.

“The Twizza Super School Series Regional Qualifier 1 was a superb start to the series,” says Lance Coertzen, Twizza Group Marketing Manager.  “The vibe was electric and we absolutely loved the friendly competition between the schools.  The students definitely brought their A game, this is evident in the results.  We are extremely proud of the special moments that were made today and cannot wait to take the action to Cape Town.  Join us at the Twizza Super School Series Regional Qualifier 2 at the Green Point Athletics Stadium on Saturday 05 October 2019 and #TasteTheMoment with Twizza.”

Live Music:  House Music star Holly Rey joined in on the action during the interval with a live performance.

EXCITING NEWS: Adding to the excitement, the Twizza Super School Series Grand Finale will boast an energetic cultural element with live performances from performing arts groups that stem from the top qualifying schools.  In addition to performing for a large audience, the groups and schools can look forward to taking home exciting prizes compliments of Twizza.  The mechanics of the selection process will be released at a later stage