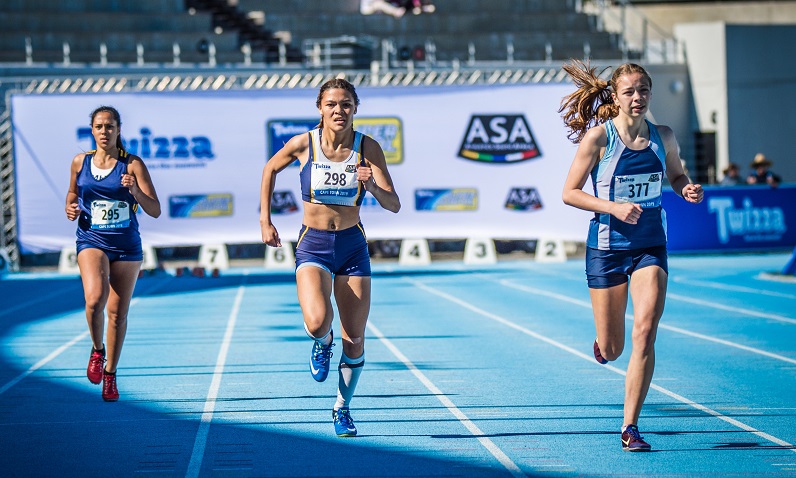 “The announcement of the qualifying schools this early, allows the contenders an opportunity to deal with their examinations first and then redirect their focus thereafter towards winning that trophy. For us, education and sports must always be encouraged to go side-by-side so that our country benefits from smart athletes,” said Athletics South Africa President, Aleck Skhosana.

“We were absolutely blown away by the enthusiasm and talent shown at both the Twizza Super School Series Regional Qualifiers,” says Lance Coertzen, Twizza Group Marketing Manager.  “If this is anything to go by, then the Grand Finale is going to be a showstopper.  Thank you to each and every school and student that participated in the Regional Qualifiers.  Your participation contributed tremendously towards the many special moments that were made.  To the qualifying schools, congratulations and the best of luck!  We look forward to seeing you in action at the Grand Finale where we cannot wait to once again #TasteTheMoment with Twizza.”

Menlo Park High School will be represented in all three categories (boys, girls and mixed) at the Grand Finale.  “It’s a privilege to take part in this national competition,” says Nico Erasmus, Deputy Headmaster at Menlo Park High School.  “The Series is a great idea.  It gives much needed exposure to athletes.  We believe that it will grow in stature.  Participating nationally for your school can only have a positive effect on young athletes.”

Parel Valei performed exceptionally well in the Mixed Team Category at the Regional Qualifier.  “For our athletes to qualify to go to such a big competition is like living in a dream,” says Nic Soekoe, Head of Athletics at Parel Valei.  “The event had an enormous impact, with the entire school and district being on a high.  If we’re looking for strength and depth, we need to enter competitions where 15 athletes per age category can participate.  The Twizza Super School Series is a great start.”

La Rochelle Girls’ High School has proven to be a force to be reckoned with.  “The Twizza Super School Series is a great opportunity to set the base for the upcoming season,” says Marianna Schoeman, Athletics Co-ordinator at La Rochelle Girls’ High School.  “Our athletes can improve their performances, while they ‘taste the moment’ of good competition.  They learn to focus, do their best and have fun while doing so.  We are very excited to go to the inaugural Grand Finale where athletics will be taken to the next level.”

“It’s an absolute privilege to be part of such a prestigious event,” says Rayno Snyman, Master In Charge of Athletics at Paarl Boys’ High School.  “The Twizza Super School Series is a wonderful opportunity to boost athletics in RSA.  Participating at the Regional Qualifiers had a positive impact on our athletes and school.  Our athletes feel that they have an opportunity to compete at the highest level and this generates excitement for athletics and motivates them to reach the highest level.”

EXCITING NEWS: Adding to the excitement, the Twizza Super School Series Grand Finale will boast an energetic cultural element with live performances from performing arts groups that stem from the top qualifying schools.  In addition to performing for a large audience, the groups and schools can look forward to taking home exciting prizes compliments of Twizza.  The mechanics of the selection process will be released at a later stage.