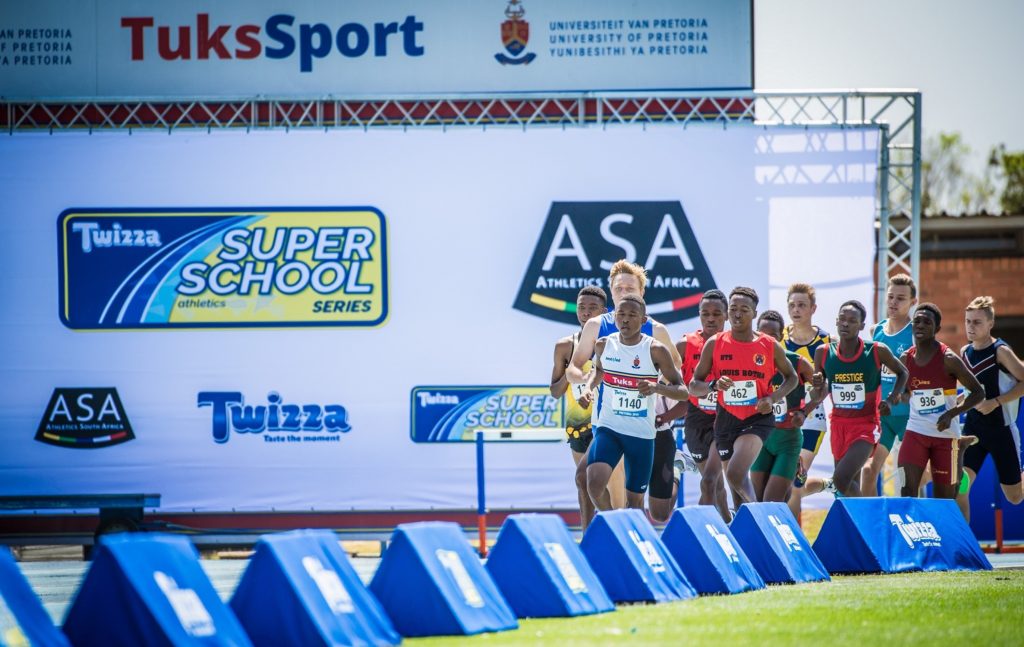 An impressive line-up of Boys Teams will battle for the title of SA’s Best Athletics School at the Twizza Super School Series Grand Finale this coming Saturday 01 February 2020 at the Bestmed TuksAthletics Stadium at the University of Pretoria.

“On Saturday we will see an epic battle of athletes with various talents and the qualifying schools fight till the end as conquerors of the school series. All eyes will be at this event to see who the champions of this inaugural series are. It will also be an opportunity to see what type of talent this competition has unearthed,” said the ASA President, Aleck Skhosana.

According to Jan Grabie, Afrikaanse Hoër Seunskool Head of athletics, it is a great privilege to have qualified for the Grand Finale.  “It is an amazing opportunity, especially for the senior athletes, to compete against the biggest talent in South Africa.  We are going to give our best to win the title.”

“The Twizza Super School Series is not only a great opportunity for athletes, but it also promotes the sport,” says Edmund du Plessis, an 800m and 1500m athlete from Afrikaanse Hoër Seunskool.  “We are very excited as we will get to compete against the best schools in the country.  Our goal is to give our best, improve our times, and win.”

According to Tebogo Radebe, Prestige College Athletics Organiser, the series brings together a large and inclusive community of schools across South Africa.  “Everyone wants to win and what an honor it would be. Athletics competitions teach children important values that they can carry through any challenge in life.  If we can walk away with good sportsmanship and our heads held high, we will all be winners.”

According to Rayno Snyman, Paarl Boys High MIC of Athletics, it’s a privilege to participate in the Grand Finale.  “It is a great series and a wonderful opportunity to compete against top athletes in SA. Suddenly the athletes have another great opportunity to take part as a team and not just individuals.”

“It is a great event for athletes to run against strong competition so that they can prepare themselves for future races in the season,” says Luciano Custodio, a 200m, 110m hurdles and 400m hurdles athlete from Paarl Boys High.  “I’m looking forward to running against good competition to help me improve my times.”

“This competition allows our athletes to realise that they are not defined by their circumstance and can rise above things that can bring them down,” says Amy Taylor, teacher and Athletics Organiser at Parow High School.  “The Series has made a big impact on our school and on our learners, who have a lot more confidence in themselves after qualifying for the Grand Finale.  They are hungry for success, not only individually but as an entire school.”

According to 2018 Youth Olympics gold medalist, Luke Davids, the event allows all athletes to compete in a safe, yet positive and competitive environment.  “The Twizza Super School Series is a great competition,” says Davids.  “It attracts young people who all speak the same language, athletics.  I am looking forward to the 100m.  My long-term plan is something that I am putting into action daily and that is to be a ‘living legend’.  This means that I would like to inspire and touch people’s lives every day that I am on the track.  It’s more than a goal, it’s a life plan.”  Davids will represent Parow High School in the U19 100m and 200m.

“The time has finally arrived to crown SA’s best athletics school,” says Lance Coertzen, Twizza Group Marketing Manager.  “We wish the best of luck to each and every athlete and school. You have earned your spot in the Grand Finale.   We look forward to welcoming you to the Bestmed TuksAthletics Stadium and cannot wait to experience a multitude of special moments with you on the day.  #TasteTheMoment with Twizza.”

LIVE ENTERTAINMENT:  In addition to an exciting battle between athletics giants from the North versus those in the South, the Twizza Super School Series Grand Finale will also boast spectacular live performances by five award-winning school’s performing arts groups.